Notes: 24 hour access to cemetery with limited office hours. Restroom and other amenities available during office ours only.

The Rav was born (1913) in Kashau, Czechoslovakia, his father Rav Meir was the Zhidichover Rav of Kashau. As a child, he studied under Rav Shaul Brach, the Kashauer Rav. After his marriage, he replaced his father-in-law (who had moved away) as Kiviashder Rav and established a yeshiva, which ran for six years, until the Nazis arrived in 1944. It is believed that his FIL offered him the Rabbanis as a wedding gift.
In 1944, the Rav was deported to Auschwitz and later Bergen-Belsen, where his parents, wife, and three young children were murdered. In the aftermath of the Holocaust, the Rav married his wife’s younger sister, established a beis din that assisted hundreds of agunos, and arranged education of many orphans.
In 1950 he moved to the United States and settled in Forest Hills where he opened a Beth Medrash. In 1953, under the auspices of the Satmar Rav, he established the Central Rabbinical Council of the United States and Canada. 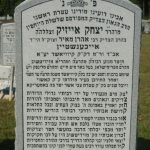