GRAVES OF THE RIGHTEOUS 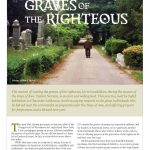 The custom of visiting the graves of the righteous, kivrei tzaddikim, during the season of the Days of Awe, Yamim Noraim, is ancient and widespread. This practice, held by Safed kabbalists to Chassidei Ashkenaz, involves paying respects to the pious individuals who lie buried near the community as preparation for the Days of Awe, and offering prayers for forgiveness and a blessed new year.

The custom of visiting the graves of the righteous, kivrei tzaddikim, during the season of the Days of Awe, Yamim Noraim, is ancient and widespread. This practice, held by Safed kabbalists to Chassidei Ashkenaz, involves paying respects to the pious individuals who lie buried near the community as preparation for the Days of Awe, and offering prayers for forgiveness and a blessed new year. US contain the graves of numerous important rabbinic and lay leaders of American Jewry. As we approach another Rosh Hashanah, those who wish to adhere to the old custom of offering prayers at the gravesites of the righteous do not have very far to go.

On this particular tour, held on a beautiful Sunday morning—the first morning of Selichot—I escorted a group of forty men and women to pay respects to the long-forgotten graves of our holy gedolim. Our tour centered on the Union Field Cemetery and the Mount Judah Cemetery; both are in the Cypress Hills section of Brooklyn.

One of the most important graves in the Union Field Cemetery is that of Rabbi Jacob Joseph, the first and only chief rabbi of New York (1848-1902). Rabbi Joseph was brought over from Europe to New York in July of 1888 by a group of seventeen Orthodox synagogues so that he could serve as chief rabbi. Other great rabbis of Eastern Europe had turned down the position, fearful of the difficulties involved in leading a community that was so religiously weak. Rabbi Joseph, who had amassed great debt in raising funds for charity in Vilna, took the position in exchange for a promise from the New York congregations that they would pay off those debts. Tragically, Rabbi Joseph met with great frustration from the time he set foot in New York. He tried to reform the kashrut industry, which was riddled with corruption and unscrupulous butchers. The butchers resisted change and ridiculed him mercilessly in the Jewish papers. Rabbi Joseph suffered a stroke after a short time in the US. He died in 1902 after serving as chief rabbi for only a few years. His funeral was attended by thousands, and was famously marred by an attack of gentile metal workers who poured scrap metal upon the funeral procession, causing a riot.

Interestingly, it is fairly common to see many modern-day Chassidim visiting the grave of Rabbi Joseph. This is because Rabbi Yoel Teitelbaum, the Satmar Rebbe, encouraged his Chassidim to do so. He firmly believed that it was not necessary to make a lengthy trip to Eastern Europe or even to Israel to find the graves of true tzaddikim. He pointed to the fact that Rabbi Jacob Joseph, a person who lived and died in holy circumstances, was buried just a short ride away from the Jewish communities
of Brooklyn. Chassidim have erected special containers in which to light memorial candles, and a group of Satmar Chassidim were engaged in solemn prayer as our own group approached Rabbi Joseph’s kever. Rabbi Joseph’s rebbetzin, who passed away some twenty years later, is buried next to him.

A short bus ride away from the Union Field Cemetery is the Mount Judah Cemetery, in which numerous prominent roshei yeshivah are buried including Rabbi Shlomo Heiman (1885-1944). Rabbi Heiman came to America in 1935 to serve as rosh yeshivah of Torah Vodaath. For nearly a decade he led the yeshivah and was among the first to bring the Talmudic methodology of the great Lithuanian yeshivah masters to
American youth. Unfortunately, he died young.

Also buried in the Mount Judah Cemetery is Rabbi Moshe Soloveitchik (1879-1941), another important figure in Orthodox Jewish life in America in the early part of the twentieth century. Son of the famed Rabbi Chaim Soloveitchik who revolutionized the method of Talmud study, Rav Moshe was
born in Volozhin. Rav Moshe studied at the yeshivah in Volozhin with his father until it was closed in 1892 by Russian authorities. He then studied at the yeshivah in Brisk, where he was recognized as a Talmudic genius. In 1929, Rabbi Bernard Revel and the leaders of Rabbi Isaac Elchanan Theological
Seminary (RIETS) asked Rav Moshe to become a rosh yeshivah at RIETS. In the twelve years that Rav Moshe served as a rosh yeshivah there, he taught many hundreds of talmidim. His chair was inherited by his illustrious son Rabbi Yosef Dov Soloveitchik, who eulogized him on his every yahrtzeit for
many decades before huge audiences. Rav Moshe is buried next to his wife, Rebbetzin Pesia, who died in 1967.

Kever of Rabbi Avrohom Pam (1913-2001). Rabbi Pam was born in Russia and was brought to America as an infant. He received semichah at Torah Vodaath, where he served as rosh yeshivah for three decades. Rabbi Pam’s gentle and humble personality left an indelible impression upon thousands of students.

Rabbi Reuvain Grozovsky (1886-1958), the son-in-law of Rabbi Baruch Ber Leibowitz, the rosh yeshivah of Kaminetz Yeshivah, is also buried here (no photo). After WWII broke out in Europe, Rav Reuvain came to the US to raise funds and secure affidavits for the students of Kaminetz Yeshivah. He later joined Rabbi Aharon Kotler and Rabbi Avraham Kalmanowitz in trying to rescue Jews from the Nazis overtaking Europe. In 1944, when Rabbi Shlomo Heiman, rosh yeshivah of Torah Vodaath, passed away, Rav Reuvain succeeded him. He later served as head of Bais Medrash Elyon in Monsey, New York.

Among the great talmidei chachamim buried in the Mount Judah Cemetery is Rabbi Chaim Heller (1878-1960). Rabbi Heller, the eclectic scholar who wrote refutations of the claims of Bible critics, was revered by Rabbi Yosef Dov Soloveitchik, who penned an eloquent eulogy in his memory.

Kevarim of Rabbi Dovid Leibowitz (1889-1941), the founder of Yeshivas Chofetz Chaim: Rabbinical Seminary of America, and his wife, Rivkah Leah. Rabbi Henoch Leibowitz (1916-2008), Rav Dovid’s son, served as rosh yeshivah after his father passed away. He molded the yeshivah in the image of Slabodka Yeshivah, with an emphasis on mussar and character development. He was known for encouraging his students to engage in educational outreach around the globe. While Rabbi Leibowitz never had children himself, he had hundreds of talmidim. Today, his talmidim have strengthened Jewish communities across North America by establishing yeshivot in places such as Miami, Los Angeles, Rochester, Dallas, Milwaukee, and Ottawa, among others. Rabbi Leibowitz is buried next to his wife, Rebbetzin Pesha.

Before the age of twelve, Rabbi Shlomo Polachek (1877-1928) was already a student at the famed yeshivah in Volozhin. Rabbi Polachek was called the “Meitscheter illui” (after his hometown) by Rabbi
Chaim Soloveitchik, who said he had never come upon such a genius. In 1892 when the Volozhin Yeshivah closed, the Meitscheter illui went to learn at the yeshivah in Brisk. In 1922, Rabbi Dov Revel invited
Rabbi Polachek to become a rosh yeshivah at RIETS. He accepted, and moved to New York. In 1928, he passed away suddenly.

Kever of Rabbi Yaakov Kamenetzky (1891-1986). Rav Yaakov studied in Slabodka Yeshivah where he met his lifelong friend Rabbi Aharon Kotler, the founder of Beth Medrash Govoha in Lakewood. Rav Yaakov first immigrated to Canada and moved to the United States in 1945. In 1948, he became rosh yeshivah of Torah Vodaath. Rav Yaakov led American Jewry, providing halachic and spiritual guidance until 1986, when he passed away.

Of special interest is the gravesite of Rabbi Eliezer Chaim Rabinovich, the Yampoler Rebbe, who may have been the first Chassidic rebbe on American shores. The great-grandson of the Ba’al Shem Tov and a known ba’al mofes, the Yampoler Rebbe founded the Skolya dynasty. Although he had wanted to
move to Eretz Yisrael, he never had the opportunity to do so. He died in 1916.

Additionally, many women are buried in these cemeteries, most notably, the rebbetzin of the famous Chofetz Chaim, Rabbi Yisrael Meir (Kagan) Poupko. A saintly woman, Rebbetzin Miriam Freida ran a shop in Radin, Lithuania (now Belarus) so that her husband could spend his time devoted to Torah pursuits. After the Chofetz Chaim died, she made her way to the United States in time to escape the Holocaust. Rebbetzin Miriam Freida brought her young son Aaron with her and settled in the Lower East Side.

Unfortunately, we did not have the opportunity to go to Mount Carmel Cemetery, also nearby, where Rabbi Dov Revel (1885-1940), the first president of Yeshiva University, and Rabbi Moshe Zevulun Margolies (1851-1946), after whom New York’s Ramaz School is named, are buried.

Interestingly, in addition to gedolim, other famous Jewish individuals can be found in Mount Judah Cemetery or in cemeteries nearby, including Supreme Court Justice Benjamin Cardozo, the magician Harry Houdini, and Uriah P. Levy, the early nineteenth-century American war hero and friend of Thomas Jefferson.

Leo Frank, who was lynched in 1915, is also buried in Mount Carmel Cemetery. In 1913, Frank was arrested and stood trial for a murder he did not commit. In a courtroom in Atlanta, Georgia, Frank, a “Yankee Jew,” was sentenced to death. The death sentence was subsequently commuted to life imprisonment. But two years later, Frank, the victim of intense anti-Semitism, was lynched by a violent mob. No doubt, davening at the kever of one who was murdered simply because he was a Jew—who died al Kiddush Hashem is especially poignant.