Notes: Visits to this cemetery are by appointment only. Call or email the Mikveh Israel office for an appointment and expect to pay $25. Main Office and Archives & Artifacts 44 N. 4th Street Philadelphia, PA 19106-2197

Directions to Kever: The Spruce Street Cemetery in Philadelphia is owned and managed by Congregation Mikveh Israel. Visits to this cemetery are by appointment only. Call or email the Mikveh Israel office for an appointment and expect to pay $25.

American ḥazzan; believed to have been born in the Barbary States; died in Philadelphia, Pa., Sept. 1811. Cohen lived in London, England, during the earlier years of his life. He is known to have been in Quebec, and also in New Orleans, in 1777. He was the minister of the Spanish and Portuguese synagogue, Shearith Israel, of Montreal, Canada, from 1778 to 1782. In the latter year, Cohen was elected minister of the Sephardic synagogue of New York. He lived there until 1784, when he accepted the appointment of ḥazzan of the Spanish and Portuguese congregation of Philadelphia, Pa.
Cohen married Rebekah Luria, of a family which had lost more than one of its members through the Spanish Inquisition. He left descendants in Philadelphia. After Cohen’s death his son, Abraham Hyman Cohen, acted as reader for a time.
Source: Jewish Encyclopedia

Note: Prior to the 1900’s, the Chazan or Minister of a congregation was the central rabbinic figure. Wedding sermonizes, divorces, circumcision, est. were all the function of the Chazan. 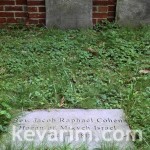