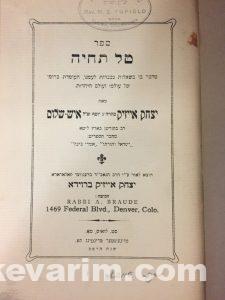 Bio Information:
“Rabbi Braude, who was born in 1884 in Lithuania, was educated in the Yeshivas of Telsiai, Mates, and Woloczin. When ordained, he became the rabbi of Girtelzole, Lithuania. In 1906 he fled to the U.S. by way of Siberia, Korea, and Japan. He first came to Denver, where he served until 1922. He then served in Dayton and Bridgeport. He returned to Denver in 1927, where he remained until his death in 1932. Thousands attended the last rites for the rabbi, and to that time it was the most impressive funeral ever to take place in West Colfax. The police deflected the Sunday traffic from West Colfax, while the funeral procession marched from synagogue to synagogue on West Colfax. All of the rabbis of Denver, Cheyenne, and Pueblo spoke words of praise for the rabbi, and all of the city’s cantors sang the prayers for the deceased. The Jewish News that week said that similar scenes had been enacted in Eastern Europe, where a chief rabbi was accorded such honor. In Denver, the gentiles explained that they had never seen anything like it. Neither had the young American generation on West Colfax. Rabbi Braude stood with ‘unashamed fervor’ for traditional Judaism … After the death of Rabbi Braude, a gifted tsadik took over the Lithuanian congregation. He was Judah Leib Ginsburg.”
(Source: Pioneers Peddlers & Tsadikim, p. 234-235) 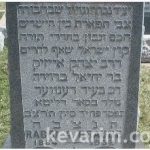 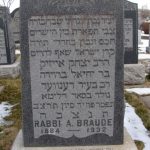 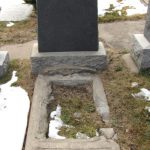