Bio Information:
Avraham Yaakov Brill [son of Pesach] was already known to be a genius in his youth. When he was 18 years old, he already was familiar with Talmud and the commentaries, and his memory was phenomenal. It is told that when he was a lad of 16, he had memorized the entire Bible (Tanach). When I was a boy, my grandfather told me a story about the genius Avraham Yaakov Brill. According to Jewish legend, when a fetus is in his mother’s womb, an angel teaches him the entire Torah, and when he is born and comes out into the world, the angel taps him beneath his nose, and thereby the infant forgets all he had learned. In the case of Avraham Yaakov, the angel forgot to tap him, and therefore he immediately knew the entire Torah.
Avraham Yaakov Brill was an expert not only in Talmud, but also in various branches of science, such as geography, history, statistics, and in remembering dates. His expertise was for the sake of knowledge. He was nicely familiar with algebra and engineering, even though he never formally learned these subjects from textbooks.
During the years of his youth, there were a number of students in Sokoly, such as Rafael Gutman, the son of Herzl, Rabbi Menachem Yonah’s grandson. Over time, Rafael became the manager of the Warsaw Community Education Department and wrote a few textbooks, such as “Bible Stories” in the Hebrew and Polish languages. In addition to Rafael, other students in Sokoly were Yaakov Yanovsky and Leibel Semieticzky, the son of Hershel Aharon Yonhas. There were educated people there who had learned externally, and among them was the teacher Meckleshtzil, who was a very sharp mathematician. When all these students would come home to their parents for their vacations or holidays, they would meet in the hall next to the new synagogue, where the genius Abraham Yaakov would sit and learn, memorizing texts in his pleasant chant. The students would surround the genius and ask him complicated questions in mathematics. Avraham Yaakov would solve all the problems orally, without a problem and without having to write them down.
Avraham Yaakov Brill was the son-in-law of the brilliant, famous Lithuanian Rabbi Itchele Ponevezher. He could have received rabbinic positions in the large cities, due to his brilliance and the fact that he was Rabbi Itchele’s son-in-law, but the genius preferred to deal in trade and not to turn the Torah into an ax for digging. He managed large businesses.
During Kransky’s time, Avraham Yaakov Brill was in Leningrad, where he managed important businesses, but after the Bolshevik Revolution, he lost all his money to nationalization. He returned, naked and with nothing, to Poland. Over time, thanks to the efforts of Rabbi Zvi Dachovitz from our town, Avraham Yaakov Brill was offered a rabbinical position in a synagogue in New York, Anshei Lubavitch in Brownsville, where he served until his last days. He passed away in the prime of his life, after World War II.
Source: Translated from the  Sokoloy Yizkor book, Credit: Needed 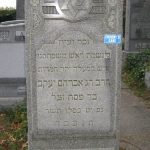