Directions to Kever: Name and address of cemetery NEEDED

Max Koppel, the 69‐year‐old rabbi shot to death Monday night in an apparent holdup attempt, was described yesterday by neighbors in Washington Heights and by members of his family as a “gentle man, always seeking to help others” whatever their denomination or color. “He loved to pick up strays,” his widow, Bertha, said. “He even used to pick up birds that were hurt and bring them into the synagogue and keep them there until they were well. He used to buy hotdogs for the teen‐agers and other children and I used to object, but he didn’t listen.”
The rabbi had previously been attacked twice. He was shot in a mugging attempt in the hallway of his building at 128 Fort Washington Avenue in 1972, and again, in front of the apartment house last Thanksgiving Day. Detective James Darienzo, who is investigating Rabbi Koppel’s death, said the slain man had more than $500 on his person Monday night. In the meantime, he said, the police were canvassing the building to see if they could get a better identification of the three youths seen leaving the apartment house shortly after Rabbi Koppel was shot. “He didn’t have to be killed,” a black community leader, who declined to be identified, declared yesterday. “He helped the poor kids in the area. He always gave when he was asked. And this year, he even arranged for the kids to see the Ali‐Foreman fight on the big screen of the San Juan Theater.” The theater, in a two‐story building on Broadway at 165th Street, was once owned by the Congregation Emes Wozedek, which Rabbi Koppel founded in 1938, a year after he arrived in this country to escape the Nazis in his native Germany. His funeral will be held there today at 2 P.M.
He became a rabbi in Breslau, received a Ph. D. in Wurtzburg and served a congregation in Berlin. When he first came to New York, he Worked for Berlitz, teaching German, Mrs. Koppel said. “Some of his students were American generals,” his widow declared. “He taught them German.” Both the theater and the Audubon ballroom above it, were acquired so the congregation would have a large hall in which to hold services for the High Holy Days. Fred Orellano, a clerk at the Citarella Liquor Store at 3915 Broadway, near the synagogue, which has been acquired by the city, said: “I knew him 30 years. He was the number one upstanding citizen in the neighborhood — a fine gentleman, always helpful.”
Source: Neighbors Call Slain Rabbi Friend to All, New York Times December 18, 1974 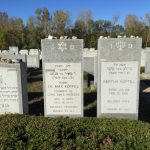