Notes: Home of Peace is the successor to the first Jewish cemetery in Los Angeles. Originally founded as the cemetery of the Hebrew Benevolent Society in 1855 in Chavez Ravine, it was moved to it current location in 1902. The remains of the 360 Jews buried in the old cemetery were moved between 1902 and 1910.

Levine, Rabbi Jacob
A prominent spiritual leader and educator in the Orthodox Jewish community of Los Angeles, died on June 18, after a prolonged illness. When Rabbi Levine arrived in Los Angeles in September, 1941, the Orthodox Jewish community was small and fragmented, located primarily in East Los Angeles. Working with a small group of colleagues, he developed several congregations in West Los Angeles. He was the spiritual leader of Agudat Achim in West Adams, Judea Congregation in the Fairfax district, and, in his later years ,was Rabbi Emeritus of the Etz Jacob Congregation. He served as president of the Rabbinical Council of California for 12 years and as president of the Board of Rabbis of Southern California for several terms. A major focus of Rabbi Levine’s efforts was furthering Jewish education. When he arrived in Los Angeles there were almost no parochial Jewish institutions. He cofounded the Westside Jewish Community Hebrew School, now known as Hillel Hebrew Academy. He was also a founder of the Los Angeles Hebrew Junior High School, which later became the Rambam Torah Institute. He was instrumental in establishing a Los Angeles campus for Yeshiva University of New York. He also assisted Rabbi Reuven Hutler in founding the Etz Jacob Hebrew Academy, an elementary school for immigrant children unable to afford the tuition of most private schools. He was born in Minsk Russia in 1914, and emigrated to the United States in 1921. He grew up in Chicago, where he attended the University of Chicago. After receiving his ordination at the Hebrew Theological College he moved to Los Angeles, where he assumed his first pulpit. He was blessed with a fine speaking voice and his sermons were often both erudite and inspiring. A congenial man of moderate temperament, he had the ability to bring together disparate factions within the Jewish community, furthering its harmonious development. He was an effective fund raiser for the educational institutions with which he was involved as well as for numerous other charitable causes. Among these was Boys Town, an institution of Jewish Learning in Israel. He is survived by his wife of 62 years, Rose Lee Levine, and three sons: Doctor David Levine of New Rochelle, New York, Dr. Barton Levine and Attorney Joel Levine of Los Angeles. He is also survived by eight grandchildren and six great grandchildren.
Source: Los Angeles Times 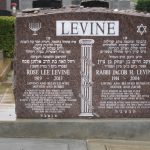