Notes: It should be noted that Acacia, Bayside and Mokom Sholom are three independent cemeteries and while Acacia and Mokom Sholom are under the same management umbrella, Bayside is independently owned and operated. The cemeteries run along Pitkin and Liberty Avenues from 80th Street to 84th Street. Access to Bayside is from Pitkin Avenue only. Although in a constant state of cleanup, Bayside is in extreme disarray and can be dangerous, use caution when visiting!!! Actual care is provided by Cong Shaare Zeedk on the Upper West Side, they claim that all records were lost in a fire.

Directions to Kever: Although in a constant state of cleanup, Bayside Cemetery along Pitkin Avenue in Queens is in extreme disarray and can be dangerous, use caution when visiting!!! In the event of an emergency call 911. Location: Gate: 32 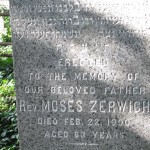