Notes: It should be noted that Acacia, Bayside and Mokom Sholom are three independent cemeteries and while Acacia and Mokom Sholom are under the same management umbrella, Bayside is independently owned and operated. The cemeteries run along Pitkin and Liberty Avenues from 80th Street to 84th Street. Access to Bayside is from Pitkin Avenue only. Although in a constant state of cleanup, Bayside is in extreme disarray and can be dangerous, use caution when visiting!!! Actual care is provided by Cong Shaare Zeedk on the Upper West Side, they claim that all records were lost in a fire.

Directions to Kever: Although in a constant state of cleanup, Bayside Cemetery along Pitkin Avenue in Queens is in extreme disarray and can be dangerous, use caution when visiting!!! In the event of an emergency call 911. Location: Gate: 22

In 1864 the Hebrew Free School Association came into existence to counter the initiatives of Christian missionaries who opened a school on New York’s East Side that offered to teach Hebrew to Jewish children with the agenda to convert them to Christianity.

A few months before the Hebrew Free School Association came into existence, this notice was circulated to all New York congregations.
NOTICE (Copy of original notice):
At a meeting of the officers of our city congregations, held on Sunday, April 3rd, a resolution was adopted, that public notice be given in your Synagogues, to the following effect:

It has come to the knowledge of the United Congregations that there are Jewish parents who send their children to schools, purporting to be “for Israelites, exclusively,” where instruction is gratuitously given in English, German and Hebrew, and also in the Christian “Testament.”   Notice is hereby given that there is no free school now in operation under the direction or the authority of a Jewish Congregation, and the effect of sending children to such an institution as is here indicated, must be to estrange them from Judaism. The Jewish Congregations of New York will shortly establish Hebrew Free Schools, where Jewish youth may be educated in the Hebrew language, as well as in their religion. Due notice will be given of the location of these projected schools. Parents are accordingly earnestly cautioned against entrusting their children to any “free schools” purporting to be for the instruction of young Israelites, except those to be organized under the supervision of the Congregations, and which, it is expected, will be open at an early day.

It was then followed by a resolution:
By a resolution, adopted at the meeting of the officers of New York Congregations, held on Sunday last, you are requested to have the above notice read in Synagogue, in English or German, for four successive Sabbaths and during the coming Holydays.New York, April 6, 5624 (29 Adar II 5624 / April 6, 1864)
Source: adapted from the Angel Orensanz Center website 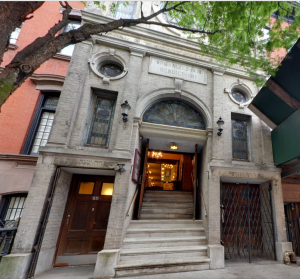 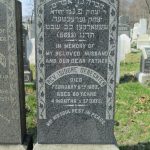